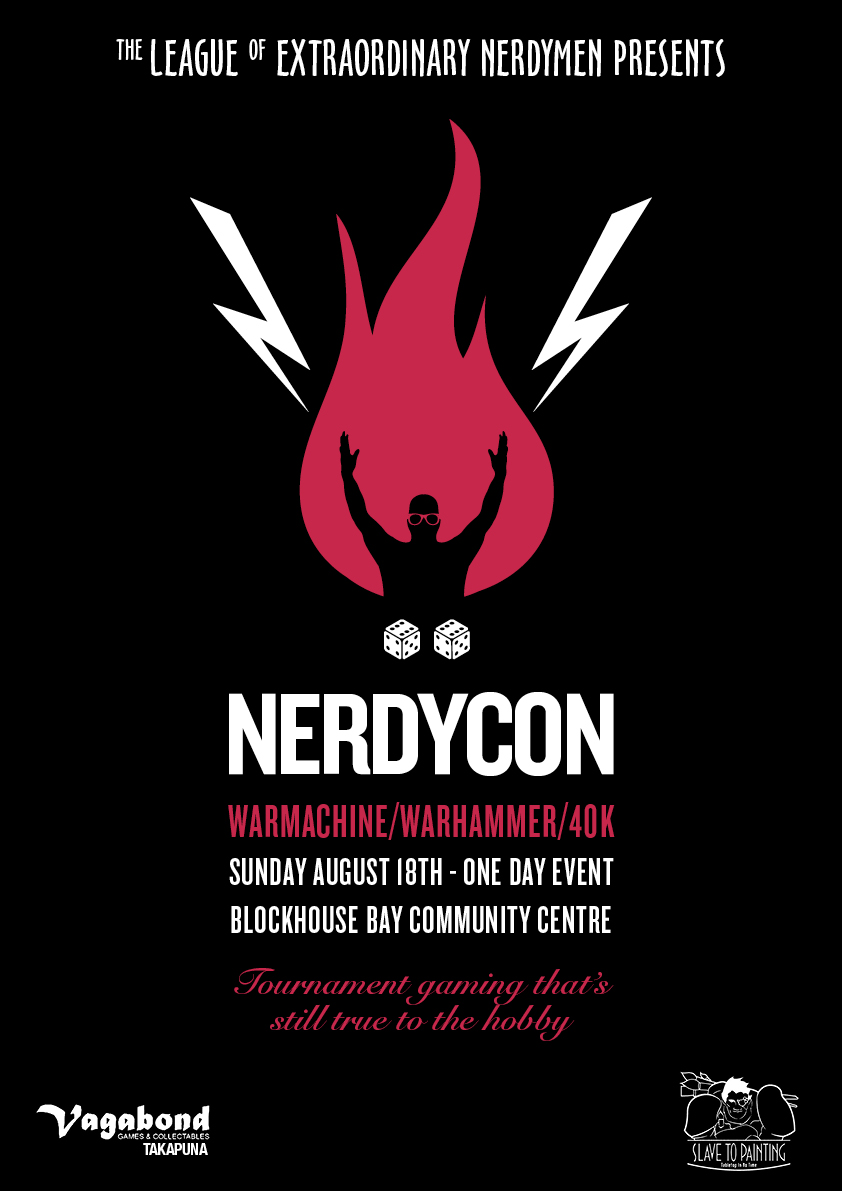 Hello and welcome!  Here before you is the players pack for the inaugural Nerdycon 2013.  The goal of this event is to encourage gamers who often can’t commit to a two day tournament due to family or work commitments, new gamers and those who believe that Warhammer is more than just a game but a hobby too.  The one day event will be at 1400 points and 5 games in the days play. It also encourages Warhammer in its pure form – as it should be.

Location
The event will be held at the BLOCKHOUSE BAY COMMUNITY CENTRE:
·         524 Blockhouse Bay Road, Blockhouse Bay
·         http://www.bhbaycommunitycentre.co.nz/
·         There are plenty of amenities close to the hall, nice kebabs next door and two takeaways, sushi, cafes and a supermarket within 100m of the venue.
·         Warhammer 8th Edition with all FAQ’s and army books released by July 18th.
·         T.O/umpire Rory Finnemore and assistant T.O/umpire Mark Skews.

Armies
Armies are 1400 points.  All current Warhammer Fantasy Armies may be used.  Chaos Dwarves may use the Tamurkhan book.

Battles
We are here to play Warhammer.  We are not interested in so-and-so’s version of Quasi-hammer.
In order to win your battle, a difference of 100 victory points is needed as per victory conditions, page 143 in the Warhammer rule book.
Each game has unique scenario and a scenario point.

Battle scenarios (rounds) will be as follows:
1.       Breaking the ice – Set up using the “Meeting Engagement” rules from page 149 of the Warhammer rulebook, except this scenario WILL NOT include the reserves roll pre deployment.  All units count as rolling 2+ before the game.  To achieve the scenario point you must issue a challenge (pg 102) and smack talk your challenged opponent in a loud voice eg “my spearman champion is going to smash your Chaos Lord in the face – huzzah”!
2.       The Killer Lord (General) – your general must do 10+ unsaved wounds before the games conclusion.  If he is a combat lord and dies via shooting or magic then the scenario point is lost, regardless of whether he achieved his mission.  If he is a wizard and he dies by miscast or killed in close combat then the scenario point is also lost, regardless of whether he achieved his mission.  Running down your enemy (whether alone or in a unit) counts towards this mission.  This mission is set up per the Battle-line scenario from page 144 of the Warhammer rulebook.
3.       Vital Push – both armies are desperate to break the line and surround the enemy!  To achieve the scenario you must have at least one fortitude point in your opponent’s deployment zone.   Deployment as per the “Blood and Glory” scenario.  See Warhammer rulebook page 148 for deployment and fortitude details.
4.       Field of dominance – both armies are vying for position on the field of battle.  Who shall gain or cede the advantage - one or both?  To achieve the scenario you must have a fortitude point in at least three out of four table quarters.  Deployment as per the “Battle for the Pass” scenario on page 146 of the Warhammer rule book.
5.       BattleCry! – Your army charges in for the final fight, death or glory with a noble cry/shout/moan!  The game is fought as per the Battle-line scenario from page 144 of the Warhammer rule book.  To achieve your scenario point you must yell your Battlecry at least once (see sports entry) in a loud voice when you charge in with a unit!
To gain your scenario point you must have successfully completed it during the course of the game (goes without saying!).
Painting
You will be deducted one point per unpainted miniature (3 colours minimum).
Regarding the display board, use this tournament as an impetus for making a board for a larger tournament.  Using this logic you can have spaces left for other units that aren’t there on the display board and still receive full points for it.  It doesn’t have to be a work of art (we do encourage this though) but just cohesive with your miniatures bases.
Painting will be judged by a panel of three at Lunch time.

Bonus Points
Army back story will have a space within the list template.